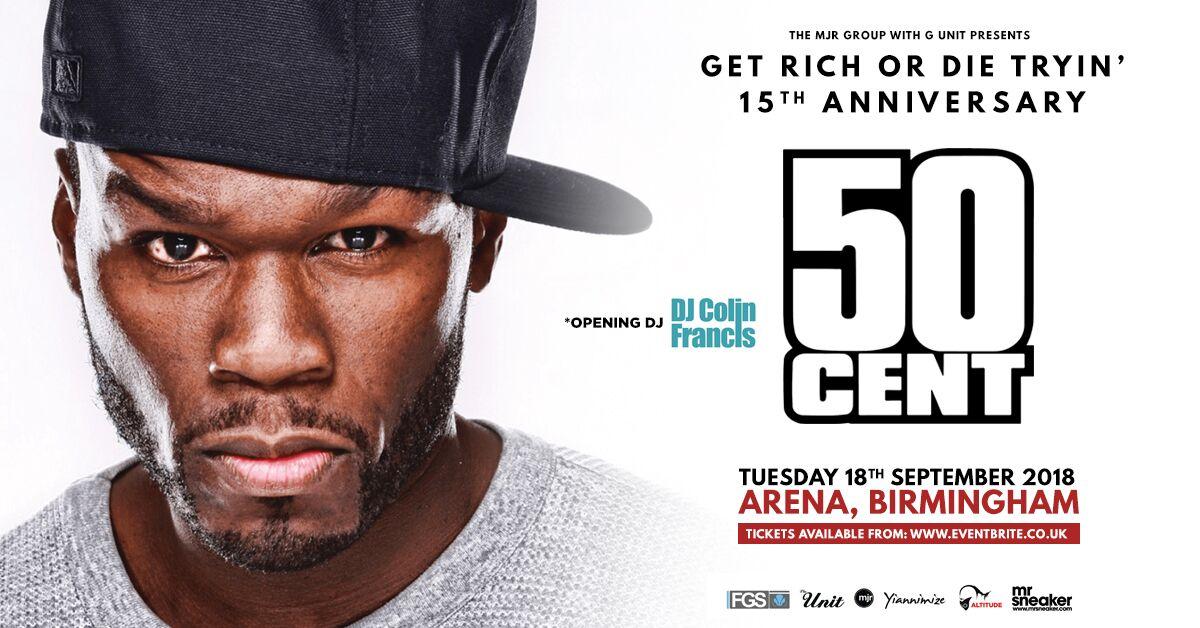 The MJR Group with Mutiny Festivals and G Unit presents

GET RICH OR DIE TRYIN’

Hip Hop Superstar 50 Cent celebrates the 15th Anniversary of  his debut album Get Rich Or Die Tryin’ with a 3 date arena tour of the UK in September.

One of the biggest names in hip hop, 50 Cent returns to the Uk for three arena shows in September, celebrating the 15th anniversary of Get Rich Or Die Tryin’. The record that took him from the streets to the top of the charts after being discovered by Eminem and Dr Dre. ‘Get Rich Or Die Tryin’ spawned a slew of hit singles including the platinum smash ‘In Da Club’, ‘P.I.M.P’ and ‘21 Questions’. The album produced by Eminem and Dr Dre, inspired the successful biopic of the same name and kicked off one of the biggest careers in Hip Hop. Over 10 million copies sold worldwide 6 x Platinum and multiple Grammy awards.

50 Cent’s early years were spent growing up in Queens, New York, his meteoric rise to fame saw him become one of the most influential rappers of the 21st Century, bringing Hip Hop culture into the mainstream and growing his own global business empire with a career that has included founding his own record label G Unit, big screen and HBO drama acting roles, real estate, investments, sports promotion and a powerful entrepreneur in technology, entertainment, lifestyle and fitness goods.

With further hits like ‘Candy Shop’, ‘Ayo Technology’, ‘My Life’, ‘Outta Control’ and many more. 50’s explosive show will be hitting Arena Birmingham on the 18th September, 02 London on the 20th and Manchester Arena on the 21st.

ID may be required on entry as proof of purchase. Resales are strictly not permitted. The promoter reserves the right to void any tickets found on, or sold through any secondary resale sites.

You will receive tickets for this event in the post within 2 weeks prior to the event.