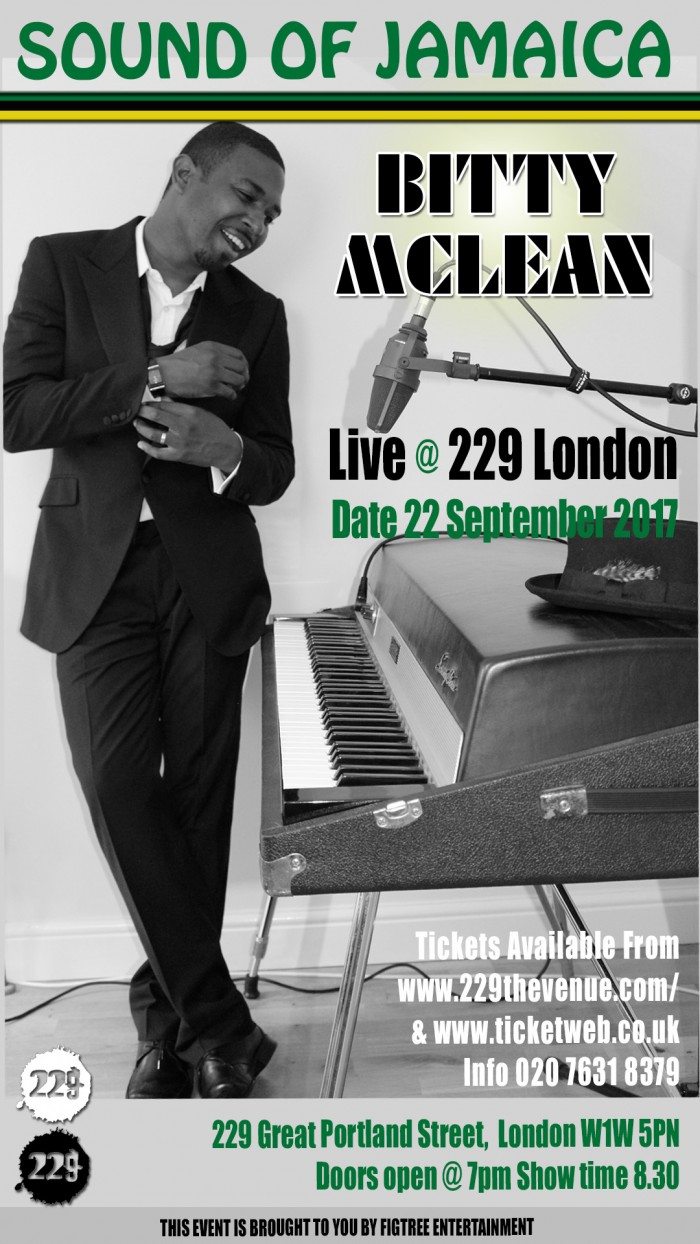 FigTree Proudly Presents The sound of Jamaica, Bitty McLean Fresh From His European Tour.
Friday 22nd September
Doors 7pm
TICKETS £27.50 + £2.50 booking fee. CLICK HERE
Bitty McLean’s song “It Keeps Rainin’ (Tears from My Eyes)” topped the charts in New Zealand and the Netherlands in 1993. McLean also played on three UK arena tours supporting UB40, Wet Wet Wet and Simply Red respectively
In 2004, he released the album On Bond Street KGN. JA., which featured his vocals recorded over vintage Tommy McCook and Duke Reid-produced, Treasure Isle rhythms from the rocksteady era, most with new lyrics of his own, but also using David Ruffin’s “Walk Away From Love” and David Gates’ “Make It With You”.[1] He recorded a studio album in 2007, entitled Movin’ On, with Sly and Robbie at their One Pop studios in Kingston, Jamaica. Movin’ On was released on Taxi / Silent River / Mideya label in Europe and the US, while JVC released it in Japan. McLean and Sly & Robbie toured Japan, Europe and Morocco in 2008 and 2009. In 2013 McLean released a new album, The Taxi Sessions, with Sly & Robbie, and a live DVD recorded with Sly & Robbie and the Taxi Gang, during their concert in Paris in May 2009. Also in 2013, McLean joined The Lee Thompson Ska Orchestra on vocals, for a cover of Desmond Dekker’s Fu Man Chu (a single release for the band). He also joined them on stage for several shows, appeared in the official video that accompanied the single and, in May 2013,  joined them on Later… with Jools Holland to perform the track.