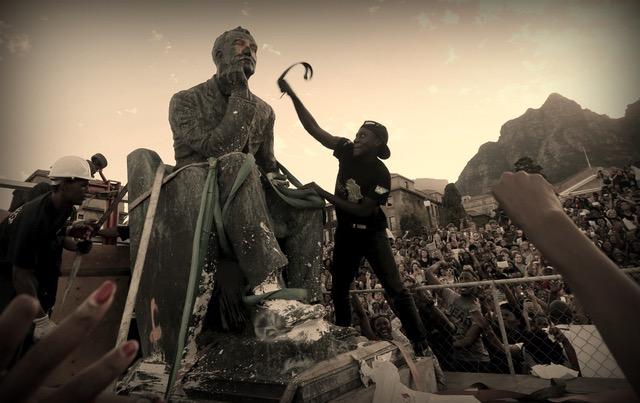 In this round table, Sean Field enters into conversation with scholars and activists based in Brighton to explore the recent emergence of the Fallist movement in South Africa, centred on the Rhodes Must Fall and Fees Must Fall campaigns, and the local, national and international significance of its demands for decolonisation in education and wider society. The University of Cape Town, where Sean works in the History Department, has been one of the epicentres of the campus protests that began in 2015, sparking activism and debate about the relation between history and politics and about the social role and responsibilities of the university. These issues also resonate in the UK and here at the University of Brighton, where a student-led campaign to ‘decolonise the curriculum’ has been launched, and where the writing and teaching of histories of British and European racism and imperialism, and of anti-racist resistance and post-colonial critique, is taking on renewed political importance with the ‘hostile environment’ for migrants and the rise of the Far Right. Focusing on the idea of ‘Decolonising History’, the panel will discuss what this means in South Africa and Britain today, and consider the questions, challenges and tensions that arise and have to be negotiated inside and outside the university in these different contexts.

Darren Newbury is Professor of Photographic History and Director of Postgraduate Studies at the University of Brighton.  His principal research interests lie in the relationship between photography, history, politics and cultural memory, with a particular concentration on Africa, and South Africa specifically.

Sean Field is Associate Professor in the Department of Historical Studies, University of Cape Town. He is author of Oral History, Community and Displacement: Imagining Memories in Post-Apartheid South Africa (2012).

Cathy Bergin lectures on the history and politics of literature and cultural discourse at the University of Brighton. Her primary research interests are in the politics of ‘race’ and colonialism in African-American and Caribbean writing, focussing on cultural formations and Communist politics in the 20th Century.

Colin Grant is a historian and author of four books including Negro with a Hat, a biography of Marcus Garvey (2008), and Homecoming: Voices of the Windrush Generation (to be published in October 2019).

John Newsinger is Professor of History at Bath Spa University. He is the author of The Blood Never Dried: A People’s History of the British Empire (2006, 2013). He is working on a history of the Labour Party and British and American Imperialism.

A representative from Decolonise Brighton University, a student-led campaign working to decolonise our curricula from the bottom-up.

Professor Sean Field, one of the world’s leading oral historians, will be Visiting Professor at the Centre for Memory, Narrative and Histories, University of Brighton, from 13th to 30th June 2019. Professor Field has worked at the Department for Historical Studies in the University of Cape Town since 1997. Through his published writings, lectures and papers at international conferences and other forums, he has made a major contribution to the theory and practice of oral/life history and the politics of memory with a particular emphasis on issues of violence, loss and identity, usually in the context of post-apartheid South Africa. As coordinator of the Western Cape Oral History Project, and Director of the Centre for Popular Memory at UCT from 2001 to 2012, he has pioneered the use of oral interviews, photographs and the evidence of material sites of memory in work to create community histories of place, belonging and displacement in Cape Town, the Cape Flats and the Western Cape. He has also studied the politics of memory in post-conflict or transitional societies more broadly, and in relation to the movement of refugees within Central and Southern Africa. Prof Field’s work has been centrally concerned with issues of subjectivity and experience, trauma and healing, emotion and empathy, utilising psychoanalytic as well as cultural and historical methods. His more recent interests lie in trans-generational memory, gender and family history.

the Centre for Memory, Narrative and Histories.
Website:
https://www.eventbrite.co.uk/o/the-centre-for-memory-narrative-and-histories-10847820898