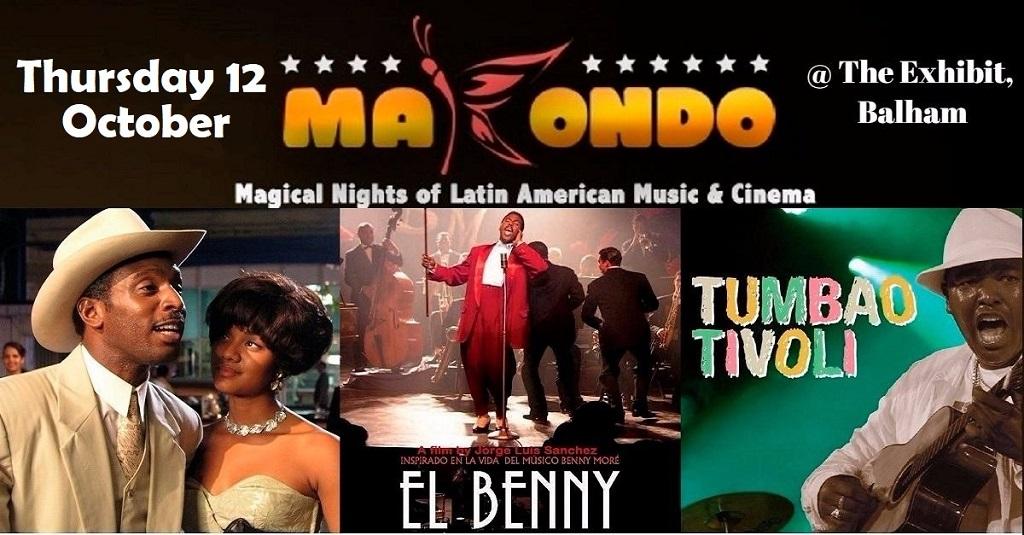 Makondo presents!
‘EL BENNY’ Cuban film about Cuba’s greatest musical legend.
Havana 1950’s. The music, the dance, the legend ‘El barbaro del ritmo’, ‘El Sonero mayor’….+ Live music by TUMBAO TIVOLI
> > Film: EL BENNY – Two screenings: 6.45 pm & 9.15 pm
Cuba 2006 / Director: Jorge Luis Sanchez / Actors: Renny Arozarena, Limara Meneses, Enrique Molina / 120 minutes / Spanish with English subtitles,
‘El Benny’ is a fictional story based on the life of the famous Cuban musician Benny Moré. The film concentrates on a period in the early 1950s when Moré starts his own ‘Banda Gigante’. In flashback we learn of his success in Mexico. Moré is caught in the events connected to Batista’s coup in Cuba. Also, he tours Venezuela, where he suffers the machinations of a vengeful businessman. After collapsing and being hospitalised, Moré swears off alcohol. Some years later, he encounters his old band-mate Monchy, fallen on hard times. The film includes new versions of his songs performed by musicians including Chucho Valdés, Juan Formell, Haila and Orishas.
The film premiered in Cuba in July 2006, and was presented at the Locarno International Film Festival in August 2006, where its star, Renny Arozarena, won the Boccalino prize for best performance for protagonist in all sections of the festival. The film was Cuba’s candidate for the Academy Awards that year. The film won the “First Work” (Opera Prima) award at the New Latin American Cinema festival in Havana in December 2006. It received its official U.S. premiere at the “Palm Springs International Film Festival” on 6 January 2007, and its east coast premiere at the Miami International Film Festival in March 2007.

> > Live music by Tumbao Tivoli trio playing two sets + DJ at 9.15 to 12 midnight
Tumbao Tivoli trio led by Leo Duany on vocals and Cuban tres guitar is the smaller version of sensational London based Cuban band with the big authentic sound from Santiago de Cuba, known as the cradle of “son”, they play a mix of Leo Duany’s own dynamic Cuban beats and Cuban classics. The strong percussive sound (both Leo Duany and Armando Iglesias started as percussionists) led to the name “Tumbao Tivoli”, “Tumbao” meaning beat and “Tivoli” the Santiago neighbourhood that gave them their unique groove.
Tumbao Tivoli has got a reputation as the tightest and most danceable Cuban music band in the country and their sets consist mostly of Leo Duany’s modern punchy compositions drawn on his son, son montuno, changui, guaracha, afrocuban and Modern Cuban all played on Cuban traditional instruments.
Performances have included the National Theatre, Barbican, Ronnie’s Bar (Ronnie Scotts Upstairs) and the Vortex Jazz Club. Leo Duany has performed at some of the world’s top venues like the Barbican and Royal Festival Hall in London and The New Morning in Paris, Melkweg in Amsterdam and at major festivals in the UK.

Prices: £10 Film + Live music (limited seats) / £5 Live music only
* Please Note: Films are shown in the boutique cinema, with a limited capacity for 26 people, as part of a Film & Live Music Combo Ticket
* We recommend you buy your Combo Tickets in advance to guarantee entry to the cinema

Event Organised by Ola Latina AND JorgeAndre Music&Dance:
MAKONDO is a Unique Event Showcasing Latin American Live Music & Cinema at the very special venue…The Exhibit in Balham.
MAKONDO will offer a new cultural experience showcasing quality live Latin American music and positive and entertaining classic Latin American cinema on a regular basis.
The Exhibit venue boasts London’s smallest independent boutique cinema, set with leather sofas, fully air conditioned with a capacity for 26 people and also The Gallery, a private room with a 100 capacity with its own bar and balcony ideal for that intimate atmosphere and experience for seasoned live music fans.
More information about MAKONDO events from: www.olalatina.co.uk / info@olalatina.co.uk AND djjorgeandre@live.co.uk