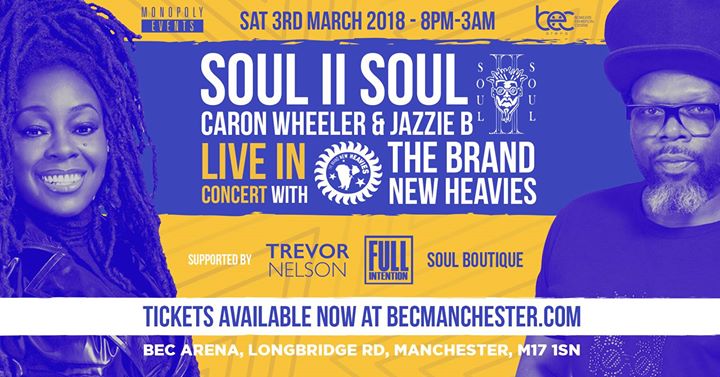 Soul II Soul & The Brand New Heavies Live In Concert
Supported by Trevor Nelson, Full Intention, Soul Boutique
Saturday March 3rd 2018 8pm-4am
Legendary soul band Soul II Soul will perform live in concert alongside the pioneers of the London acid jazz scene The Brand New Heavies on March 3rd 2018 at the B.E.C Arena Manchester.
Soul II Soul have been one of the venues most frequently requested bands, and after all of these years it gives us great pleasure to finally bring the Funki Dreds to grace our main stage. Soul II Soul originally formed in London as far back as 1988, and still feature original band members Carol Wheeler and Jazzie B. They are best known for their 1989 UK chart topper Back To Life and Keep On Movin which reached no5 in the UK chart. They have won two grammy awards and have been nominated for five Brit Awards.
The Brand New Heavies are the pioneers of the London acid jazz scene and are an institution not just in the UK but globally. Their unique mix of jazz, funk and soul & disco has lit up the charts in the UK for well over two decades. Centred around songwriters/multi-instrumentalists Simon Bartholomew and Andrew Levy, the core members of the group since its founding, The Brand New Heavies are best known for a string of successful singles in the early 1990s.
These two legendary bands are supported by a string of the country’s finest DJ’s, who will be playing you a selection of soul, dance, RNB, disco, and classic house.
Radio 1, Radio 1xtra, and MTV’s very own Trevor Nelson will be headlining the support, alongside house music duo and prolific remixers Michael Gray and Jon Pearn otherwise known as Full Intention (Defected). Manchester’s very own Soul Boutique complete the supporting line up, who have played many big festivals in the area lately including Parklife and Macclesfield Festival.
A limited number of earlybird tickets will go on sale on Monday 26th June 2017 at £20, these will increase to £25 and £30 respectively once the allocation sells out. A limited number of VIP tickets will also be available for £30.
Hotel Football: Exclusive offer for Bowlers Exhibition Centre bookers:
Take advantage of Hotel Football’s special room rates for Bowlers Exhibition Centre guests (inc. bed and breakfast). To check availability, please contact Hotel Football’s reservation team on 0161 751 0433 or email sleep@hotelfootball.com and quote ‘Bowlers Exhibition Centre’”.