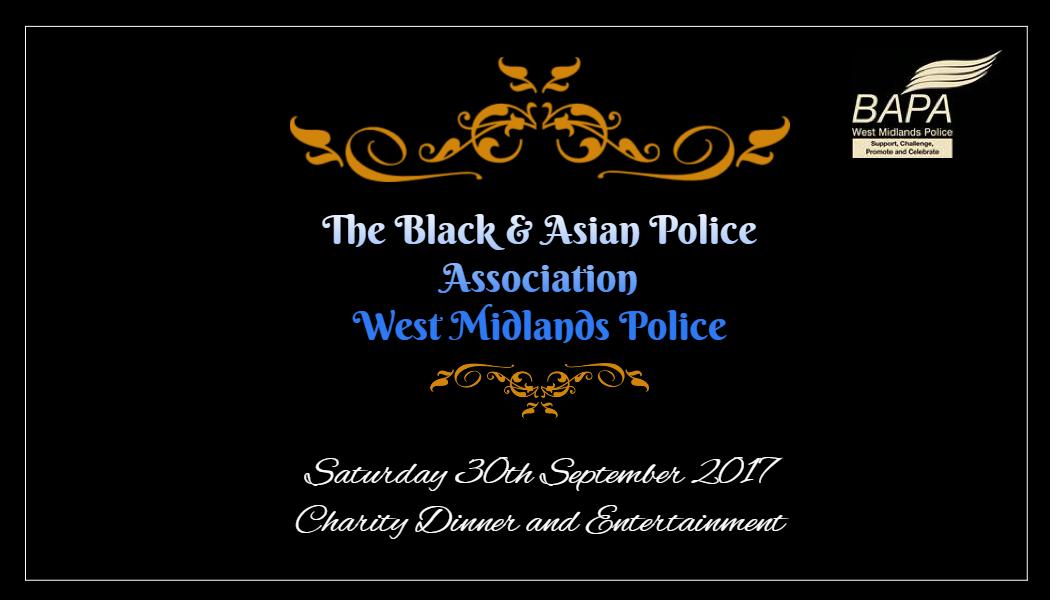 The primary role of the Black and Asian Police Association (BAPA) is to support, value, encourage and represent BME staff by protecting their right to equity in the workplace. We seek to improve the working environment within our organization and to enhance racial harmony and the quality of service delivered to the BME community of the West Midlands. The BAPA also assists the West Midlands Police Service in delivering a fair, equitable service to all sections, ethnic backgrounds and religions of the West Midlands Police Community.

A few ordinary officers have achieved extra-ordinary things and have changed the course and the history of policing. We have influenced changes in legislation which has in turn improved the quality of service delivery and improved the working environment. There is still work to be done as new recruits join our ranks standing on the shoulders of those before them who chose to blaze a trail and, with courage, raise our head above the parapet.

We now want to acknowledge and celebrate key contributors in our BME policing and community family who have gone beyond the call of duty and made a significant difference. We are therefore hosting an awards event on September 30th 2017, at Tally Ho, which will acknowledge them, with our communities, and inspire others to assist. We also have an educational element for youth separately and on the night an informative guide to the history of BAPA.

In the   Community Category

Nominees Should have over the   year or over a period of time worked within the community to ensure that   cohesion and harmony is maintained and promoted. Nominees can be someone who   works alongside criminal justice system (non-police) or third sector who has   exhibited leadership in ensuring fairness, equity of treatment and outcome.   Nominee could include Custody Visitors, BME appropriate adults/advocates, KIN   individuals or Community panel representatives. Stop and search etc.

Any person who runs clubs or put   on events to promote community and give outlets to BME peoples. Nominees   should be community volunteers who put others first. Scout leaders, OAP   luncheon Clubs, Football Coaches or Cubs, Sports or Youth Club providers.

In the Police Category

Officer of the   Year Award

Officers who has this year or   over a period of time endeavoured to ensure equality and fairness within West   Midlands Police.

Nominee can work in any role but   ideally should be a champion for the BME agenda within force.

Civilian    Officer of the Year Award

Staff members who over the year   or over a period of time endeavoured to ensure equality and fairness within   West Midlands Police.

Nominee can work in any role but   ideally should be a champion for the BME agenda within force.

Nominees include any person   working in educating children or young adults. Nominee should have over the   year or period of time shown dedication to the education or empowerment of   BME peoples whether in 4-18 education or mentoring of individuals out of education.

To be awarded to Police Officer,   Police Staff or Team who have over the year or period of time shown real   genuine commitment to equality and fairness between West Midlands Police and   the Community. Nominees should have shown imitative and invention in tackling   issues which divide and harm individuals and communities.

Nominee should have shown over   and period of time a commitment to diversity and fairness in the CJS.   Individual must have shown they were  willing to challenge and persevere   in the face of opposition.