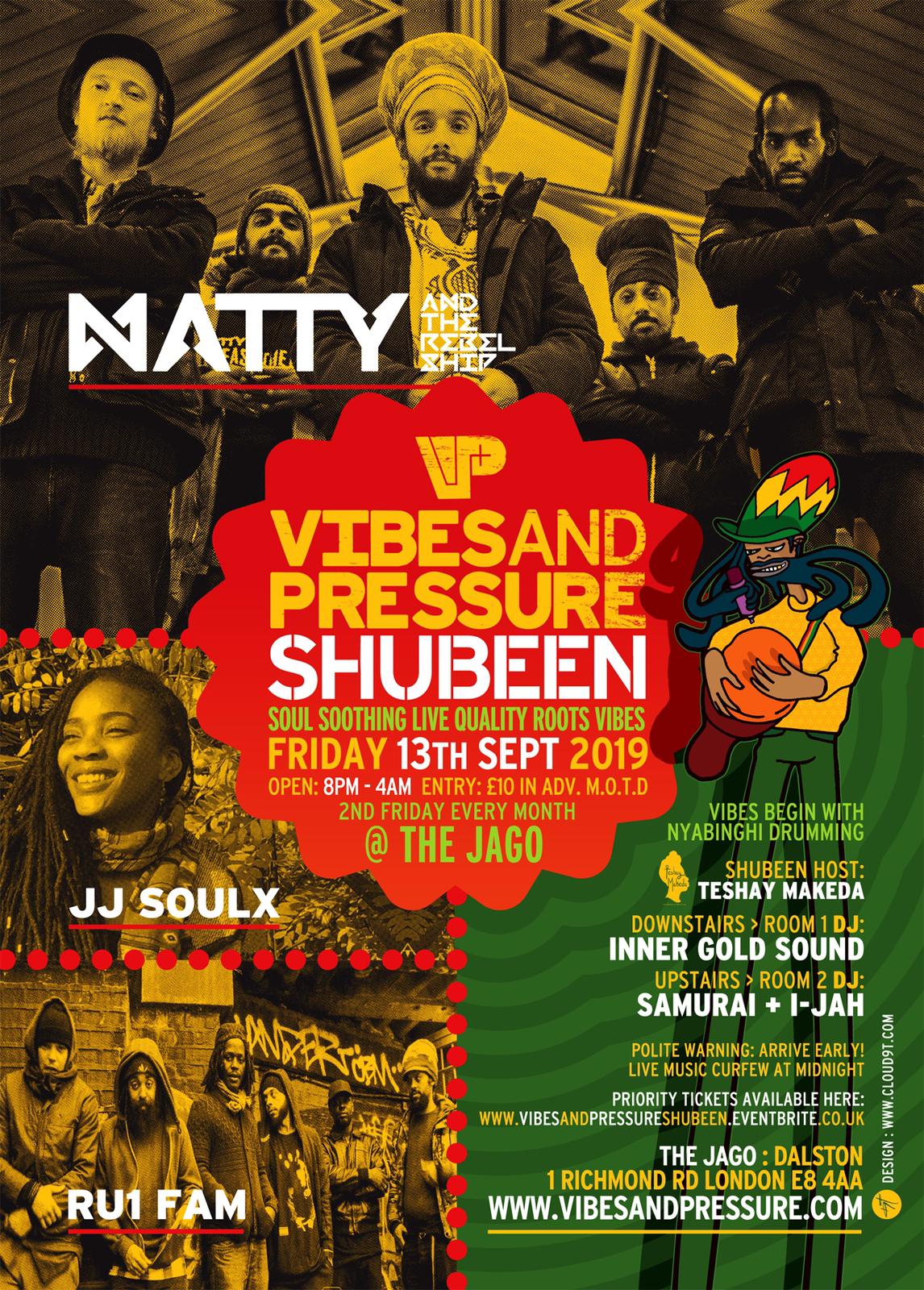 The Vibes n Pressure Shubeen is Back! Voted one of the best nights out in London, our flagship event has returned to Dalston, every second Friday night at the Jago (formerly passing clouds), commencing 13th September.
Vibes n Pressure is a movement, a record label, a philosophy. For the past 10 years, we have created some of the most memorable events in London, from open mic nights for emerging talent, to much bigger one-day festival themed concerts, events promoting critical thinking of overarching themes, and our flagship event … The Shubeen, which is rooted in a warm and welcoming vibe, with upfront rootical music, Ital food, and great live performances. We pride ourselves on a history of audiences leaving our events both uplifted and inspired. A few of the acts to have blessed our stages include Wretch32, Kwabs, The Skints, George The Poet, Dawn Penn, Tom Grennan, Junior Marvin, Akala, Lee ‘Scratch’ Perry, a young Ed Sheeran to name but a few.
Some of our highlights in the past have included hosting and curating festival stages at Glastonbury, Bestival, Victorious Festival and others, hosting the UK leg of the Rototom European Reggae talent search, creating the Youth-Hub events which hosted live debates on themes such as consumption, revolution, the black UK experience and other big concepts, with film and live performances. We have released singles, albums and compilations on our record label and along the way created internships for young people to learn about the record industry, and gain experience in events management.
Come to the Jago on the 13th September and be apart of the movement. The first event will include performances from foundation Vibes and Pressure family members… Natty and The Rebelship headlining, supported by the amazing JJ Soulx and Hip Hop wizards RU1FAM.
Vibes n Pressure are proud sponsors of the ERASE Foundation, who support schools and orphanages in Africa.
A simple way to look at our philosophy is the concept of taking higher energy consciousness (Vibes) and applying it (Pressure) so as to affect positive change. Key Rastafari principles of balance, equal rights and unity and are at the foundation of this movement.