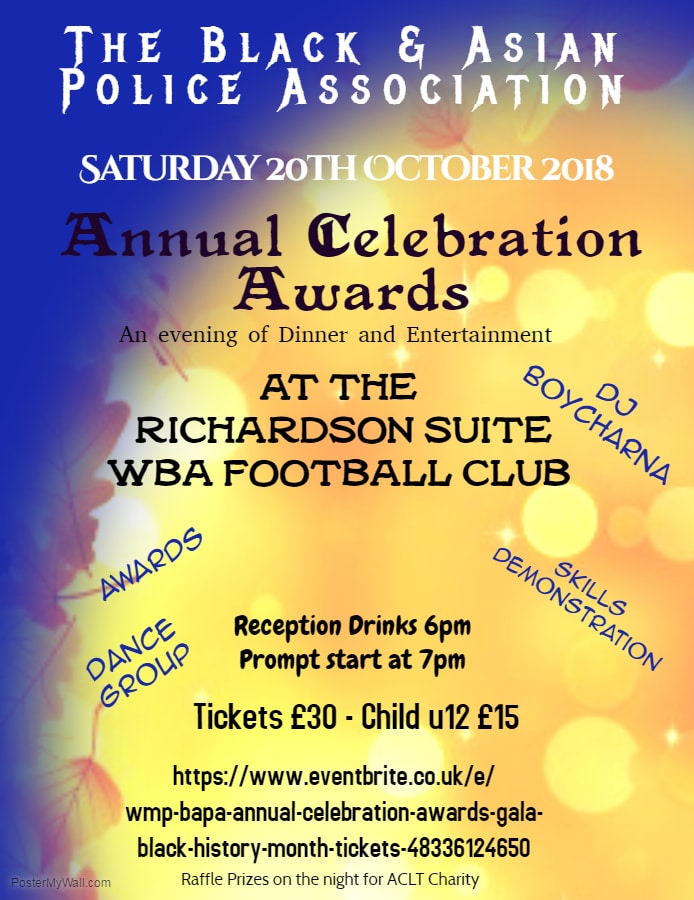 The Black and Asian Police Asssociation cordially invite you to the Annual Celebration Awards Gala Evening.

The event will be attended by a wide range of guests including past and present officers and community representatives and will be an opportunity for to celebrate and promote the contribution of BME officers and staff to policing in the West Midlands at our annual awards.

This year’s awards ceremony will focus on celebrating the immense contribution of  BAME officers, staff and community have made to policing the area of West Midlands.

This year we have achieved some great things both  internally and externally. We broke the glass ceiling in promotions with success not only at Sergeant rank but also at senior leave at Inspector and after 15 years (check this fact) at Chief inspector rank with three BAME were  promoted in the recent process.

These has also been some of the significant milestones and partnership working with our community which  should also be acknowledged and celebrate. Together we marked the 20th anniversary of the death of Stephen Lawrence, celebrated Vikhaskiand Diwali and most recent the 70th Windrush Anniversary  which has been recognised locally and nationally.

acknowledging the contribution of individuals with awards such as Police Officer of the Year, Police Staff of the Year, Community Champion plus others.

So please come and join us in at our BAPA Awards to celebrate the pride with which our officers, staff and community continue to serve the West Midlands community.