AISLING IRIS AT THE JAZZ ROOM AT PLAYON… 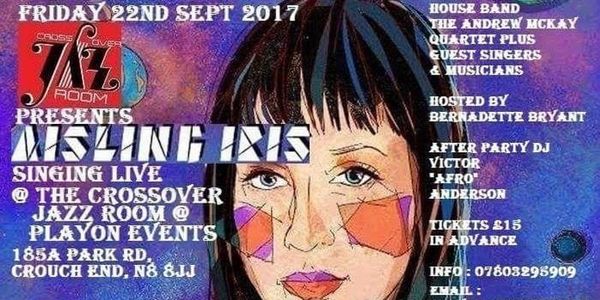 You will be entertained by the Andres McKay Quartet the house ban set with very talented musicians – they have all performed at Ronnie Scott’s.   This performance will be followed up by a line up of professional and up and coming vocalists and to round off the second part of the evening will be the special guest:-

Aisling (pronounced Ashling)
Irish born singer songwriter Aisling who has toured with Roots Manuva,
had a top 5 hit with the Japanese boy band W-inds and has shared the same stage as Omar.

It was while working at Universal Music that she met Tony Swain who was Head of A&R at the time and a successful pop producer having produced hit singles for eighties icons like, Spandau Ballet, Imagination, Alison Moyet and Michael McDonald.Aisling signed to his production company and together they collaborated on an album’s worth of material including “Is it Over” which can be found on Aisling’s self-released E.P. “You Took The Sun Away.

Her own band which features the music from her just released debut album “Night time Moves” produced by Drew Horley (Ty, Natalie Williams) and co-written with Andrew Mclean and Phil Craig which has since been play listed on Jazz FM, Mi-Soul, and Solar radio and featured by Jamie Cullum as the BBC Introducing Artist on his BBC Radio 2 show.

Passing Clouds’ an uplifting jazz soul track from the album is a collaboration with UK soul royalty Andrew Mclean (multi instrumentalist and drummer with the Grace Jones band) has proven a firm favourite with stations such as Jazz FM and Mi-Soul radio, earning her praise from Acid Jazz heavyweights; Simon Bartholomew of The Brand New heavies who mentioned Aisling as “one to watch”
during an interview for Craig Charles Funk & Soul show on BBC Radio 6, while drummer Derrick Mckenzie of Jamiroquai has called her “very inspirational” to work with as a songwriter and vocalist.

Her eclectic talents have seen her touring as support to Roots Manuva and working with such artists as Phil Asher, Ian Friday and Domu and also supporting UK legends Omar, the late Lynden David Hall and Eska Mtungwazi. Asling also co-wrote the top five r&b pop hit “I’m a Man” for Japans boy band “W-inds” and Jazz ballad “Used to Be” for Sony artist. Timothy James.