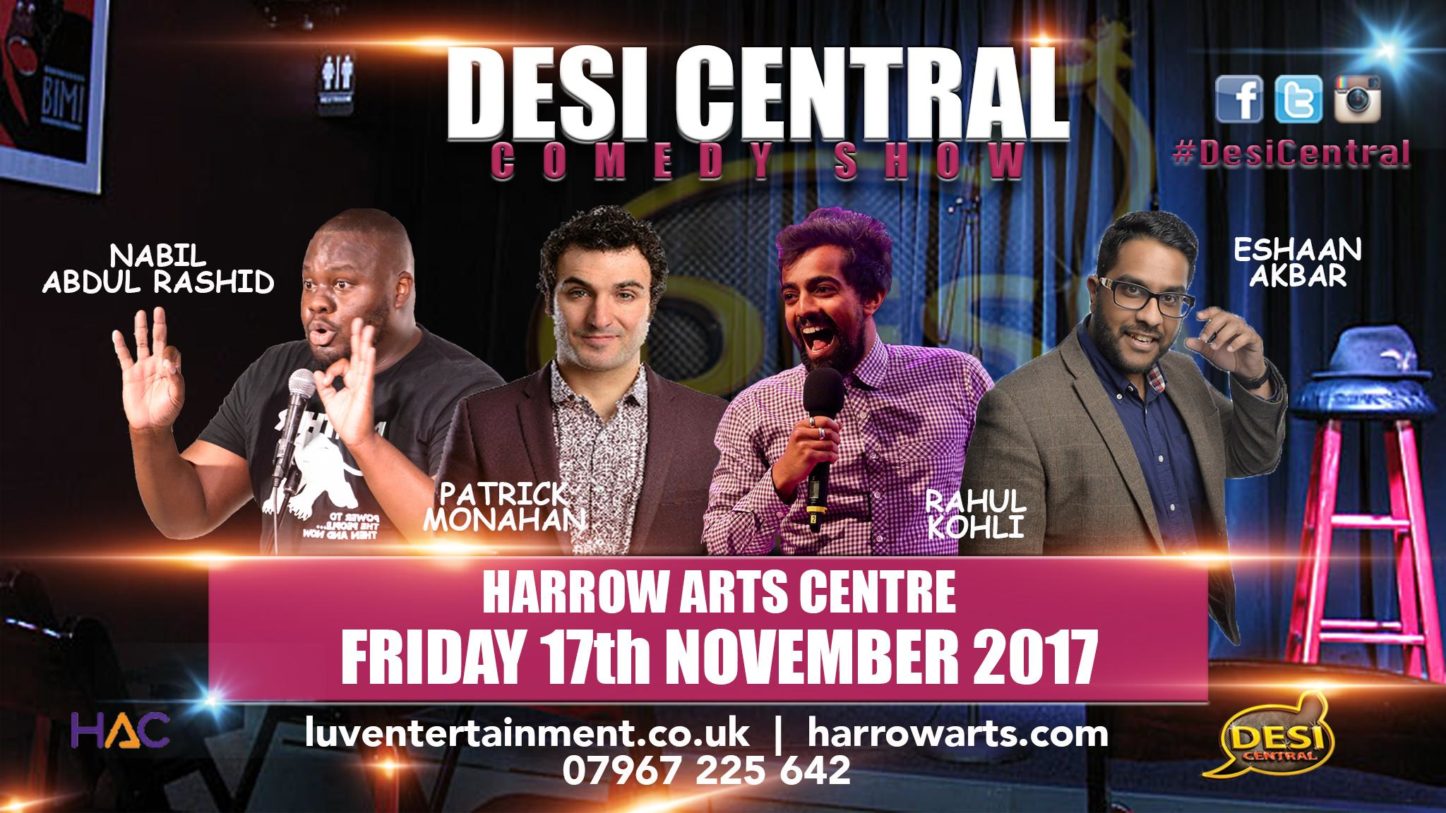 After previous sell out shows around the UK Desi Central comes to Harrow Arts Centre with an amazing line-up and night of nothing but laughter.

Eshaan Akbar
Since starting comedy in March 2014, Eshaan Akbar has established himself as an act with exciting potential.

A winner of the Piccadilly Comedy Club New Comedian of the Year 2016, Eshaan has been in the finals of other prestigious competitions, including So You Think You’re Funny 2014 and Laughing Horse 2014. He performs across the UK and has performed in Germany and Bangladesh. In 2016, he supported Dane Baptiste on his UK tour and did warm up work for “Micky Flanagan and Friends”.

His professional career has taken him from private banking through to corporate communications via a career in local government public policy. He has previously written for The Guardian, The Times online, The Observer New Review and The Huffington Post UK. He is a member of the UK Speechwriters Guild and Fellow of the RSA.

Born and raised in East London, he is a Manchester United fan (obviously) and has torn cricketing allegiances – he fails the Tebbit test every time. He has previously dabbled in Bollywood and salsa dance choreography.

Already a well known name on the urban circuit, in 2015 he made his transition to the mainstream and now regularly performs at the country’s leading venues. In 2016 he supported Dane Baptiste on his nationwide tour and was selected to take part in the prestigious Pleasance Comedy Reserve Showcase at the Edinburgh Fringe.

Rahul Kohli
Rahul Kohli is one of the fastest rising act on the circuit. A young geordie asian man combining fierce political satire with surreal storytelling, in just a few short years, his debut solo show: Newcastle Brown Male gained critical acclaim at the 2016 Edinburgh Fringe Festival earning him a top pick of both BBC Radio 4 and the Huffington Post. It also gained him radio credits for BBC Radio 4’s State of the Nation and BBC Asia Networks Big Asian Comedy Night. On top of this he has gained writing credits for other Radio 4 Shows while performing at some of the biggest clubs around the country from the Stand up North to the Comedy Store down south. In January 2017, Rahul became an award-winning comedian winning the prestigious NATYS, formerly the Hackney Empire New Act of the Year Award.’

Born in London but raised in Northern Nigeria to a Medical doctor father and a politician/business woman mother he has been fortunate to travel around the world at young age and had a private school education before moving to back to England to live in Croydon south London (or croy croy as he fondly calls it).

Nabil Abdul Rashid switches from surreal to satirical in his dichotomy of being a middle-class educated man yet simultaneously a street-smart urban youth while avoiding clichés when dealing with topics such as being a black Muslim in South London. He switches accent and languages and blends them into his material.