Reggae on the Lawn 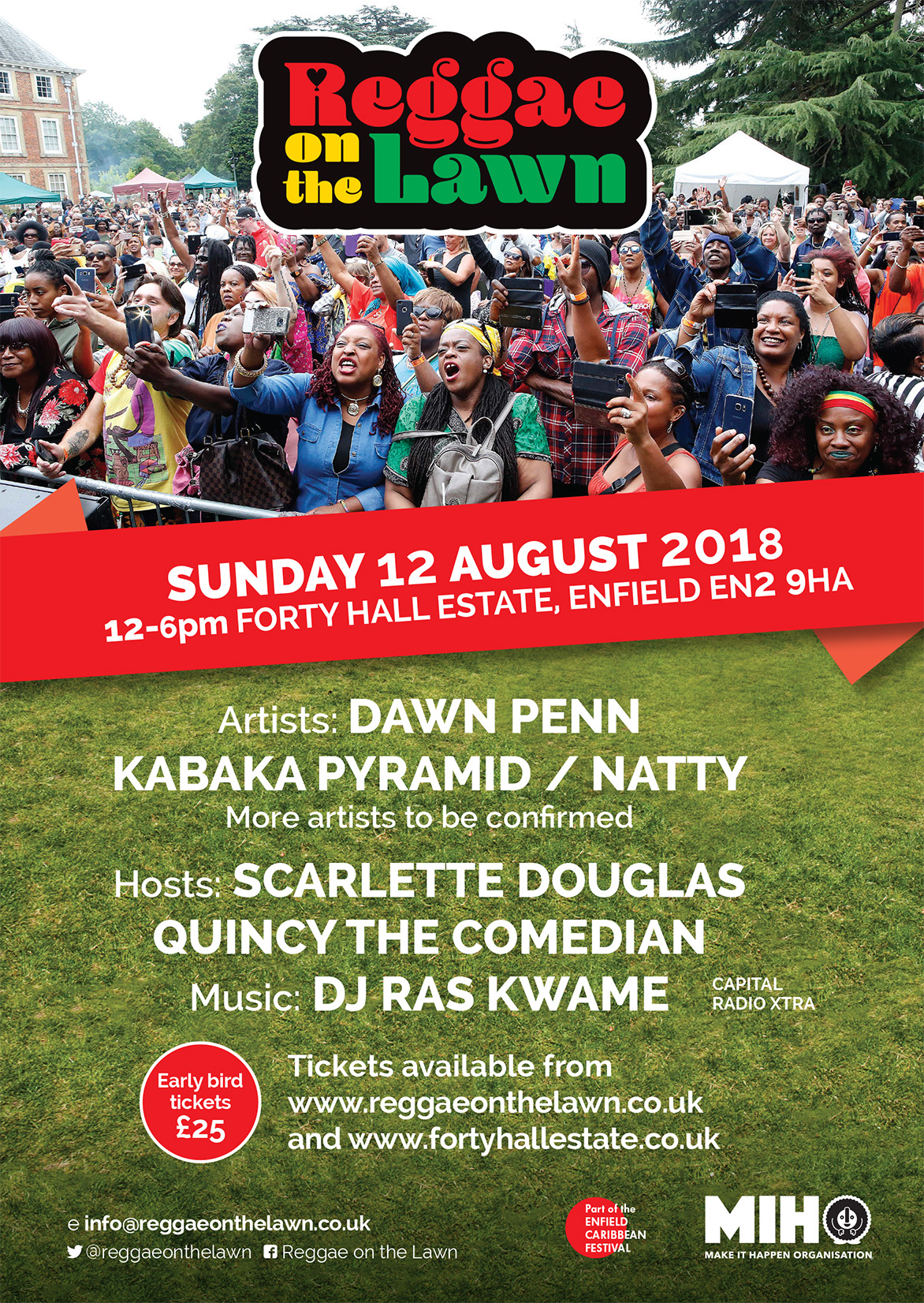 ‘Reggae on the Lawn’ returns to Forty Hall Estate, Enfield, EN2 9HA – on Sunday, 12th August, 2018 – 12noon – 6:00pm.
Now in its second year, this one day festival (organised by Make it Happen Organisation – “MIHO”), has already attracted some of the best reggae stalwarts,  such as last year’s headliner, Luciano – along with Dennis Bovell, and this year’s Artist Line-up is no exception.
In Celebration of 2018 – Year of the Woman, and flying the flag for the ‘Women in Reggae’ fraternity, will be the indomitable Etana (Jamaican born Winner of the International Reggae & World Music Awards 2013) – who is also known for her thought-provoking single “Wrong Address” (about how we view others from different socio-economic backgrounds), and for being the first female, in seventeen years, to achieve a Reggae Billboard #1 with her “I Rise” album;  Empress Lyan.S  (Briton’s Got Reggae, and Reggae Star Factor fame); along with one of the original ‘Queens of Reggae’ – Dawn Penn (Jamaican born, universally loved) – whose anthem “You Don’t Love Me – No, No, No” is known the world over – and has been covered by artists such as Beyoncé, Rihanna, Lily Allen, to name a few – is sure to have the crowd rocking and singing along.
Also, featured on the Bill is the multi-talented artist and producer, Kabaka Pyramid (Kingston, Jamaica) – who spreads the message of spirituality and conscious evolution through his music; as well as Natty (San Francisco born, London raised) – a treasured Icon on the UK music scene, and best known for his album “Man Like I”; and The Reggae Choir (UK Ensemble – open to all – their aim is to bring people together through the power of reggae music).
More Artists to be Announced.
Hosted by:  Scarlette Douglas and Quincy The Comedian
Music by: DJ Ras Kwame
There will also be Arts & Crafts stalls and a Children’s Play Area, along with Food and Refreshments – a day for the whole family to enjoy.
“I attended the ROTL and thought it was brilliant.  I had a great day, lovely mixed crowd with all ages.”  ~ Claire – ROTL 2017 patron.
Early Bird TICKETS – £25 – (Adult) | Early Bird: £10.00 (Child: 11-17yrs old) | Early Bird Family: £60.00 (2 adult and 2 young people) | Early Bird VIP: £50.00
Available from:
www.fortyhallestate.co.uk