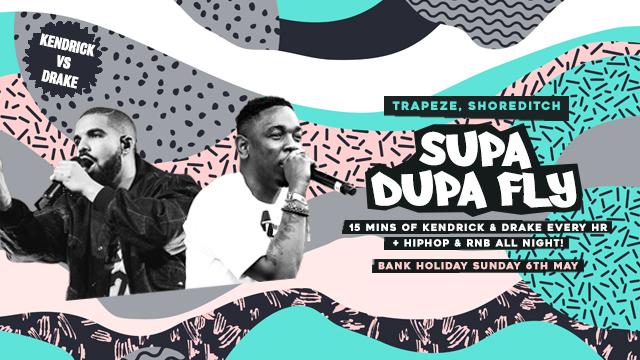 £7-9 priority tickets Tables free to book for 10+ trapeze@supadupaflylove.com / £10 on door

Get in touch for birthday / large group discounts!

As two of the greatest & most influential rappers of our generation. We thought it would only be right to throw a whole party dedicated to the music of Aubrey ‘Drake Graham’ & ‘Kendrick Lamar’ Duckworth! We’ll be taking over both floors of Trapeze in Shoreditch to battle it out. Expect 15 mins of straight up Drake & Kendrick every hour on each floor from the best to do it…

CJ BEATZ is one of the biggest & best hiphop djs in the country and in our top three favourite Supa Dupa Fly DJs! CJ started as Hip-hop Dj for DMC, and always KILLS IT at SDF! He’s one half of the production due, Wide Awake too.

TP Long time resident, and a former DMC Young UK DJ of the Year, TP has featured on BBC Radio 1Xtra, Capital Xtra and Kiss 100. Supporting legends from DJ EZ, to Grandmaster Flash, TP spins for brands and events all over the globe, but always turns up most at home behind the decks for Supa Dupa Fly. www.mixcloud.com/theDJTP

Ellie Prohan is the dancing DJ with copious amounts of energy and good vibes, she was born to hype up a crowd! With residencies under her belt for Supa Dupa Fly and Rock The Belles she has now been spotted to do sets for MTV & guest mixes for BBC 1Xtra. Not only is Ellie a talented DJ who knows how to read an audience, she is one of very few DJ’s with the unique talent of hosting her own sets, picking up the mic to turn an already pumping night into a frenzy. You’ll find DJ Ellie Prohan spinning the freshest Hip Hop, Garage, RnB and Grime. www.mixcloud.com/djellieprohan

DJ Fearney is not only a diverse DJ but also a presenter. She has interviewed world famous artists including Katy B, Rita Ora, Future and Wiz Khalifa. Her sets have seen her DJ in the UK and internationally. With notable DJ events including Lovebox, Wireless and the Empire Awards as well as doing a recent guest mix for Nick Bright on BBC Radio 1Xtra.  Brands worked for include H&M, New Look and Missguided.2018 will see Fearney release her debut EP. www.djfearney.com

Sandra Omari Over the last year, Sandra Omari has DJ’d for Emeli Sande, Shorebitch, Hype Clothing, Le Jeune Club (Paris) and many more. Following on from having her own weekly show on Mystic Radio FM, Sandra has been invited to record guest mixes for brands (e.g The Pit LDN) and stations, such as Balaami Radio. After such a successful year, she has now been added to the rosters of the two famed party collectives founded by BBC1xtra’s Emily https://soundcloud.com/211-girls

Over 18s only. Valid ID required.

Tickets guarantee entry until 11.30pm – you must arrive before this or ticket will be invalid. £10 after this / on door without  ticket.