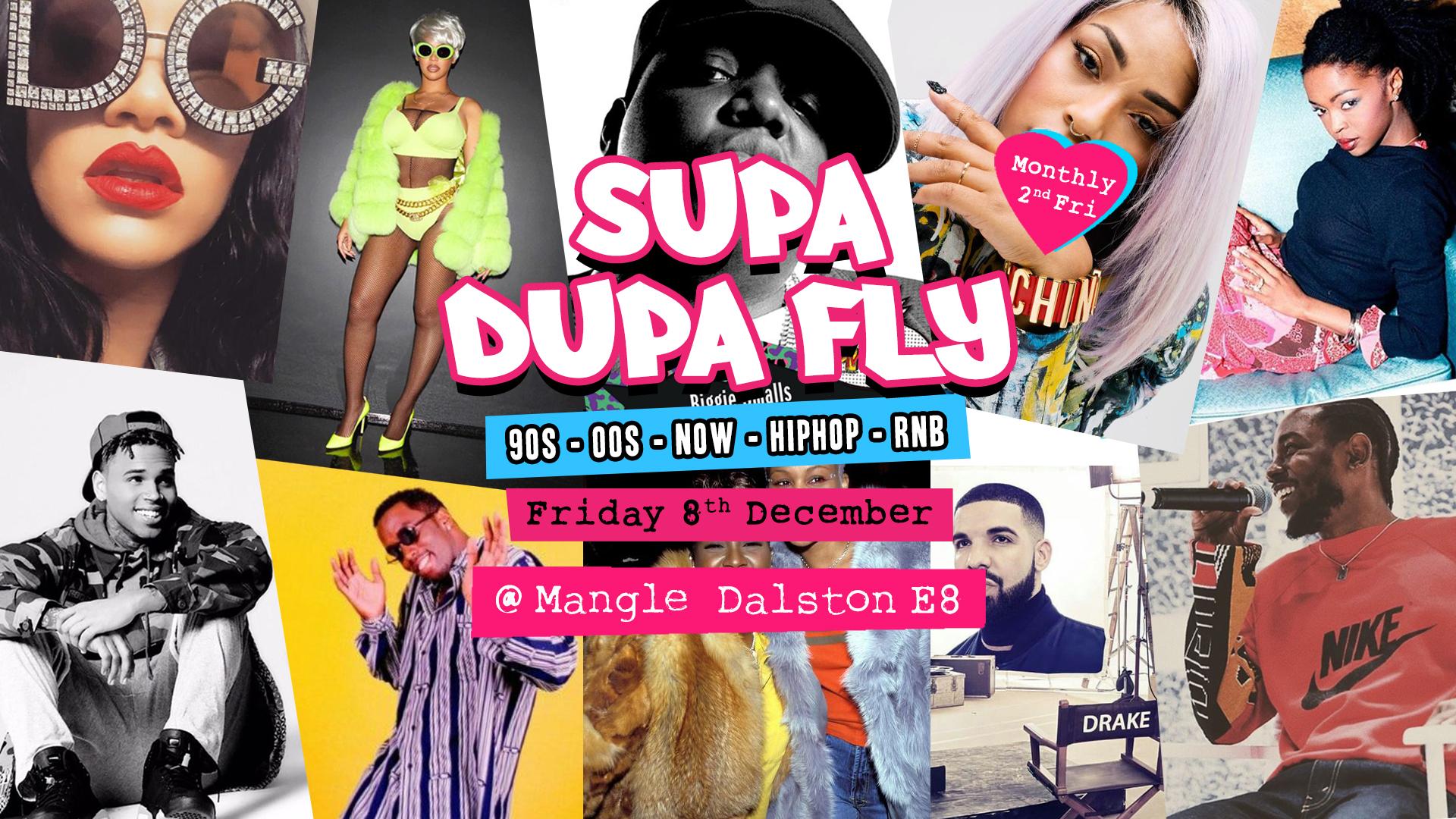 (2nd Friday of every month)

Tables free to book for 10+ eastldn@supadupaflylove.com

Get in touch for comp birthday entry & large group discounts

The Mangle is the hottest Warehouse spot in East London… 750 capacity, in the heart of London Fields, next to Dalston, with a HUGE sound system & just a stones throw from Shoreditch! We have 100s of 5* reviews from you lot for this one! This month we’re joined by Hiphop Royalty, Dj Semtex.

Supa Dupa Fly has become THE necessity in many 90s, 00s & now Hiphop & RnB lovers diaries, packing out every weekly event for the past 6 years, and becoming unquestionably the biggest event of it’s kind in the UK. Supa Dupa Fly have hosted shows for artists including Jazzy Jeff, EZ, Rita Ora, EZ & Disclosure with recent impromptu performances from Amerie & Professor Green. Hosting arenas at festivals including Lovebox each year, as well as lots of high profile shows at Shoreditch House have been some of the many highlights. There have been numerous recent press features from the likes of Time Out, The Guardian, The Metro and The Evening Standard.

Shortee Blitz (Kiss) is a M.O.B.O. award winner and multi nominee who has hosted a show on Kiss FM since 1994! He has had everyone in the building from Jam Master Jay, LL Cool J to Nas & Jay-Z. He has released compilations for Rawkus records, Pure Hip Hop & Dj’d shows for Jay-Z, MTV, Mariah Carey and more! He has just launched a weekly show on 4Music where he live streams his mixes of the hottest videos about to the world! Arguably the hottest HipHop party Dj in the UK. https://www.mixcloud.com/blitzmixes/

FEELGOOD SMALLS is our newest edition to the team. Straight out of Toronto, she has garnered industry respect playing at some of the hottest clubs in her hometown as well as for working with notable world brands such as Nike, Red Bull, Nuvango, Convey and Elle Magazine. https://soundcloud.com/feel-good-smalls

HOSTED BY BIG TED Ted IS Hip Hop! Supa Dupa Fly’s champion crowd pleaser and host like no other! His now legendary 10-year stint on Kiss 100 was home to a show that featured hip hop greats from Run DMC to Missy Elliot to Jay Z! www.mixcloud.com/teddy-ted – A TRUE LEGEND IN THE GAME

Priority Tickets £7-9 – Ticket guarantees priorty entry until 11pm, after this you may need to queue / Guestlists £8 eastldn@supadupaflylove.com / £10 on the door

Tables Free to book for 10+ eastldn@supadupaflylove.com (entry by 10.30pm essential)

Transport London Fields overground is 2 mins walk away. Bethnal Green tube is a 20 minute walk, which is on the night tube.

Last cash entry is 12am