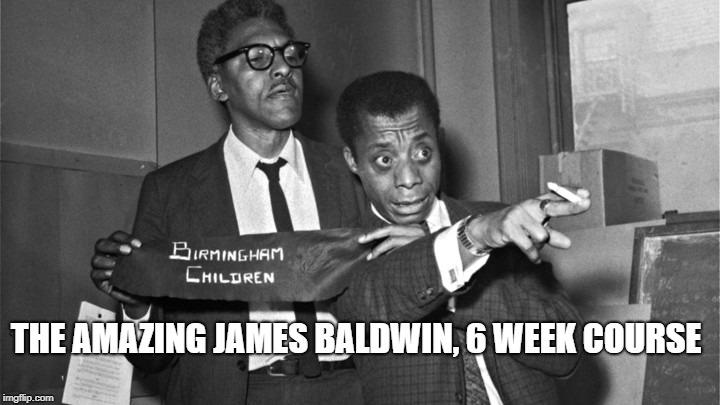 The Amazing James Baldwin: An exciting, interactive multi-media online course triggered by the recent Baldwin  film dramatisation ‘If Beale Street could Talk‘.  This course also references the Oscar-nominated documentary ‘I Am Not Your Negro’. This six-week course is an introduction to James Baldwin and a selection of his works. The course draws on a range of written and visual material to present an overview of his writings and contributions to the questions of race and identity, examining how they continue to impact us now.

We will use obscure video clips of James Baldwin (interviews, speeches, TV appearances) and some of his most widely received fiction and non-fiction writing, including Going to Meet the Man, Sonny’s Blues, Notes of a Native Son, and The Fire Next Time. Rare photos, paintings, and sketches that capture his spirit are also included.

Course Leaders: Dr Michelle Asantewa, Donna Mckoy and Tony Warner.
Six previous physical courses at the Black Cultural Archives, New Beacon Books and Genesis cinemas in London all sold out so don’t delay booking. This is the first time it has been delivered online.
Every Monday 6.30-8.30pm, live via Zoom from 18th May, for six weeks. Cost £51.00

Weekly Schedule for The Amazing James Baldwin:
WEEK 1:
White Gods, Angry Black Men and the French connection. ‘Notes of a Native Son’ (1955):
Overview of this first collection of essays with particular attention to ‘Autobiographical
Notes,’ ‘Notes of a Native Son’ and ‘A question of Identity’, which will explore Baldwin’s identity as a
writer and experiences as a Black man in America during the height of the 1960s Civil Rights
Movement and highlighting parallels to movements of today such as Black Lives Matter.
WEEK 2:
Words as Weapons of Resistance: ‘Everybody’s Protest Novel’ and ‘Many
Thousands gone’ (essays from ‘Notes of a Native Son’):
Reading and assessment of these two essays from ‘Notes of a Native Son’. Critical of fellow African American writer and mentor Richard Wright’s book ‘Native Son’, they served to distinguish the commitment and art of the two writers on the
question of resistance or ‘protest’ literature.
WEEK 3:
Race and the media, what changes have been made from 50s – 60s?
‘The Fire Next Time’ (1963): Continues the assessment of the race question through Baldwin’s closer
examination of its persisting impacts of Africans in America and the question posed in the
documentary ‘I am not your Negro’, which is for ‘White America’ and more widely white supremacists
everywhere to bear the responsibility to rationalise their need and constructions of the
‘n**ger/negro.’
WEEK 4:
How to make a racist – reflections on ‘Going to Meet the Man’
(short story 1965 from collection of same name):
From his first collection of short stories of the same name
(1965). In this story, Baldwin examines the makings of a racist from his childhood experiences
attending picnic lynchings with his family to becoming a state official (County Sheriff) with powers to
arrest and beat up Black protestors. Comparisons are drawn from current abuses by State Police (US)
and experiences of stop and search/profiling used disproportionately on Black men in the UK, which
expand on the psychological impact of racism.
WEEK 5:
Jazz, Grime, Ghettos and Road Men – ‘Sonny’s Blues.’ (short story from the collection ‘Going to Meet the Man’):
Explores Baldwin’s literary style and techniques; particularly, the use of ‘flashback’ and intensity of language. This short story captures the repressions felt by young Black people, especially boys born in deprived, communities with which they are
disenchanted and are driven to sub-cultures of criminality, drug addiction and violence. Baldwin uses
blues and jazz music to reflect the possibility of creative expression that could alleviate the sense of
hopelessness and lack of opportunities.
WEEK 6:
If Beale Street Could Talk:
A mature writer by the time he wrote this book in 1974, Baldwin
continues his exploration of love between a young couple and the love that sustains families and
communities despite the obstacles that could otherwise force them to implode. This session explores
the further development of Baldwin’s literary technique and style as compared to his earlier writings
and his commitment to shaping narratives as told by the people themselves – in this case a pregnant
teenager Tish (the protagonist). It will also explore the film adaptation of the book, by Barry Jenkins,
which led to an Oscar award for actress Regina King in 2019.
Essential Reading:
Notes of a Native Son –(1955)
The Fire Next Time– (1963)
Going to Meet the Man (short Story Collection – 1965)
If Beale Street Could Talk (1974, book) and 2019 film adaptation
FILM: I Am Not Your Negro (Raoul Peck, 2017)
​
Further reading:
The Wretched of the Earth (1961, essay ‘On concerning Violence’) Frantz Fanon
Films. Concerning Violence directed by Goran Olsson. The Battle of Algiers
www.blackhistorywalks.co.uk

Other events in 2020 from www.blackhistorywalks.co.uk: