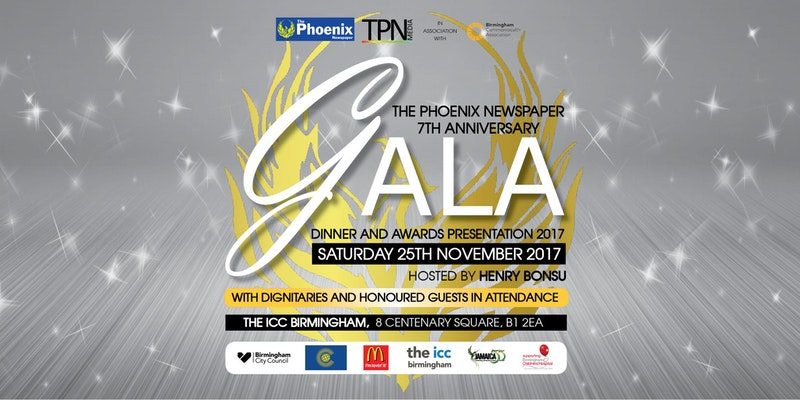 The Phoenix Newspaper is proud to announce its Gala Dinner and Awards Presentation 2017, set to take place on Saturday 25th November 2017 at the International Convention Centre (ICC) in Birmingham, supporting Birmingham Childrens Hospital and another charity still to be announced.

The Phoenix Newspaper Gala Dinner and Awards Presentation will be a Commonwealth Celebration, Connecting Communities and creating a cohesive atmosphere to promote Unity and Respect to Inspire a New Generation.

The Phoenix Newspaper has been championing unity and the connecting of communities since its inception 7 years ago, giving people a live and let live attitude with a non-biased approach to organisations, individuals and places. With its firm and steadfast commitment to promoting positive, objective and informative news, a true game changer in a system designed for overwhelmingly over-sensationalised negative news.

The founder of the publication believes strongly in the sentiment of the great Mahatma Ghandi – “Be The Change That You Wish To See In The World.”

This year, it is a right Royal occasion, with His Imperial Majesty Alayeluwa Ooni Adeyeye Enitan Babatunde Ogunwusi Ojaja II, 51st Ooni of Ife from Nigeria scheduled to be in attendance alongside High Commissioners, Presidents, Prime Ministers, State Governors and Senators from across the Commonwealth and beyond.

Invited guests also include The Mayor of Birmingham, The West Midlands Mayor, The Lord Lieutenant of her Majesty the Queen and his Vice-Lord Lieutenant.

There will be live entertainment along with the unveiling of our sister publication, Phoenix Nigeria.

The Gala Awards are a chance for individuals, organisations and businesses to be honoured for the work they do to promote Unity and Respect, and a shortlist for the awards will be announced in the coming months.

This event will be a night to remember, connecting communities from all backgrounds, so book early to avoid disappointment. This a very special occasion to celebrate the richness and diversity of the Commonwealth and its contributions to the UK.

Look out for updates of sponsors and VIP guests in The Phoenix Newspaper, and more information including how to purchase your tickets.