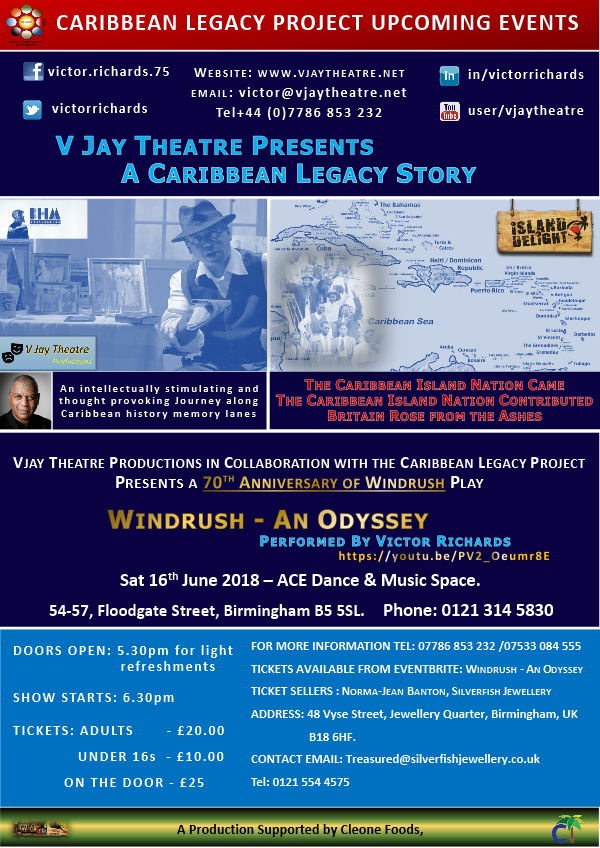 In celebration of the 70th Anniversary of Windrush, The Caribbean Legacy project team in collaboration with VJay Theatre Productions, brings to you the play “A Caribbean Legacy Story – Windrush An Odyssey” on Saturday 16th June 2018.
This will be performed by British Urban Film Festival Award Nominee Victor Richards for his spoken word album Illusion “Streets Paved With Gold”.
Victor Richards will entertain and share the experiences of the 500+ pioneering Caribbeans, as they left their warm islands to embarked on the Ship, Empire Windrush, heading for a new adventure to help rebuild Britain’s post war battered and tattered infrastructure.
Come along and find out how those first intrepid adventurers helped Britain to stand on her feet.
This will be an evening of entertainment and an intellectually stimulating and thought provoking journey along Caribbean history memory lane.

UNDER 16yrs: £10.00 AGED 5 & UNDER: FREE
Email Vision2Reality@hotmail.co.uk for link to book tickets for Young People & Children aged 16 yrs and under.