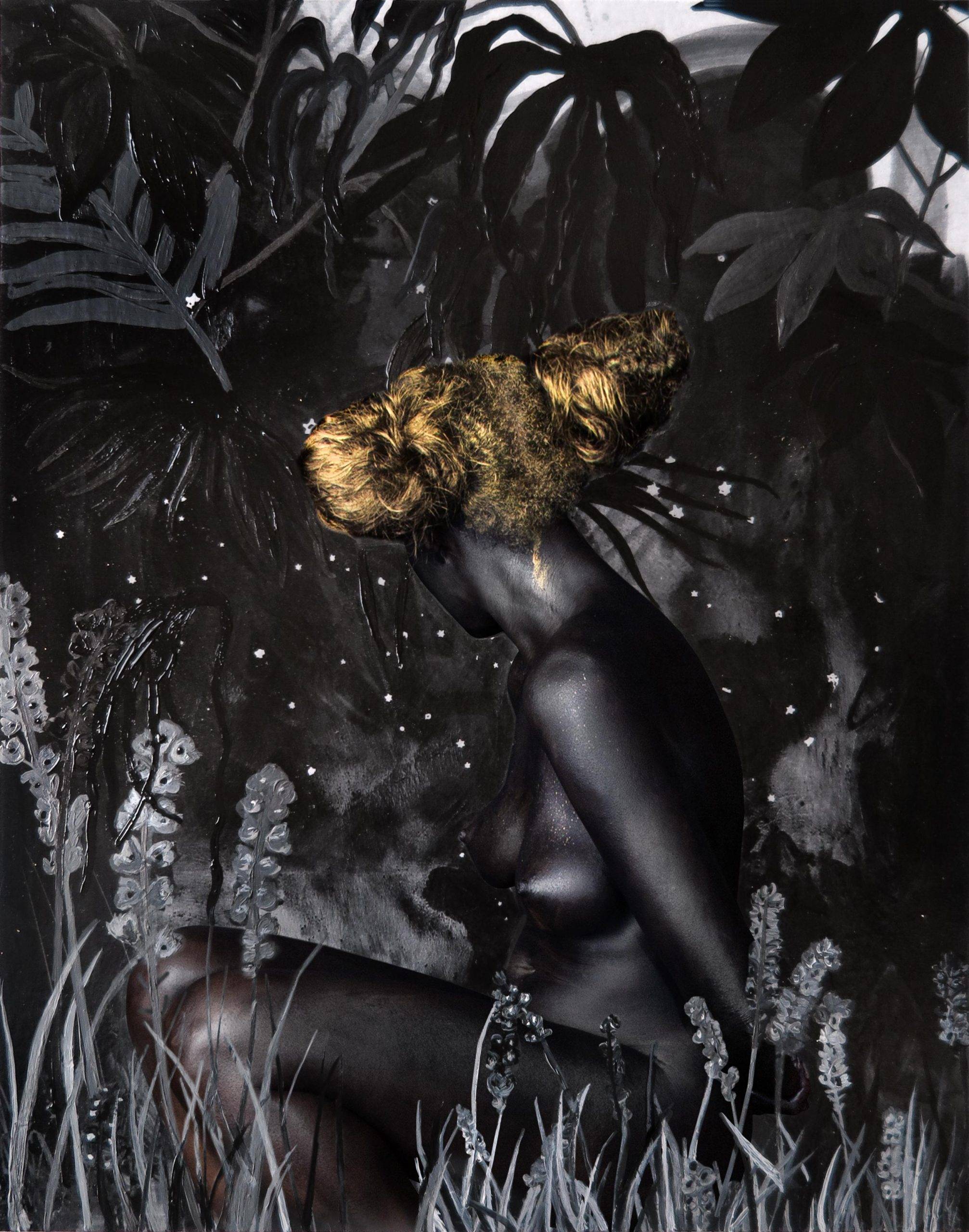 Amar Gallery, London is proud to announce the first UK solo exhibition from the British Liberian artist Lina Iris Viktor, running from September 12 to October 20 2017. Bringing together new and existing abstract works in a solely black and gold colour palette, Black Exodus renegotiates artistic and socio-political definitions of “blackness”, whilst exploring existing narratives surrounding race and the African diaspora. The exhibition marks the first ‘Act’ in an evolving series for the artist.

Presenting large and small scale gilded works on canvas and paper, the exhibition highlights the co-dependent relationship of light and dark, within a folkloric universe of the artist’s creation. Taking a new Exodus tale as a  point of departure – a mythologised dystopia where the #black race itself has been extinguished – Viktor’s works interrogate the implications of this theoretical future.

In her ongoing ‘Constellations’ series, Viktor presents black canvases perforated by hand-gilded gold patterns – regal abstractions piercing the surface of the darkness beneath. Drawing together religious symbology, cosmology and naturally occurring #biological patterns – such as human DNA – the artist explores indigenous and etiological beginnings, repositioning #blackness not as a void, but rather a source of matter. The hypnotic alchemy of the artist’s gold renderings present Viktor in the role of cartographer, mapping out labyrinthine patterns which reference the Dogon of Mali, indigenous cultures of Australia and Aztec and Ancient Egyptian lore. Riffing on the national flag of the UK, Viktor also debuts large-scale black translucent gilded canvases titled ‘Union Black’ and ‘Black Union’.
#UnionBlack #Blackunion
New pieces revisiting Viktor’s ‘Dark Continent’ series depict the artist’s form as a central motif, though these too are considered abstractions – ultimately obscuring the human subject. The works on paper present the artist shrouded in a shadowy botanical landscape; at once inviting and foreboding, the setting evokes an uneasy paradise, somewhere before – or after – the fall. Here Viktor’s use of gold is sparing, highlighting focal points within the picture plane: a sun, rays of light or a glimpse of the human form. The silhouetted tableaux expose displaced figures seemingly oscillating between the ancient and the futuristic; the body becomes a timeless conduit for interrelated, trans-cultural histories, representing a circular idea of being which references non-linear (and distinctly #African ) concepts of time.

Discussing the exhibition, #Viktor explains: ‘Black Exodus explores the charged topic of race universally, lifting the veil of seemingly ‘colour-blind’ societies, and reinvestigating stereotypes surrounding “blackness”. Across the globe, throughout history and to this very day, the black race has suffered subjugation and marginalisation, and “blackness” has become indicative of deficiency, or absence. The exhibition repositions the colour as a ‘materia prima’ – the ultimate presence that is the source of all matter, all people and all life; it is the place from which gold and precious materials are mined, and in which stars and planets are born.’
#Blackexodus #exhibition
Lina Iris Viktor is a multidisciplinary artist, working across performance, painting, installation and photography. Of Liberian heritage, Viktor currently lives and works between New York and London. Uniting materials and methods from both contemporary and ancient art forms, her work calls into question the nature of time and being. Viktor’s utilization of ancient gilding practices is notable by the inclusion of 24-karat gold to create intensely evocative canvases embedded with “layers of light”, in the form of symbols and intricate patterns. These “light-works” at once address the infinite and the finite, immortality and mortality, microcosm and macrocosm, and the socio-political and historical preconceptions surrounding “blackness” and its universal implications.