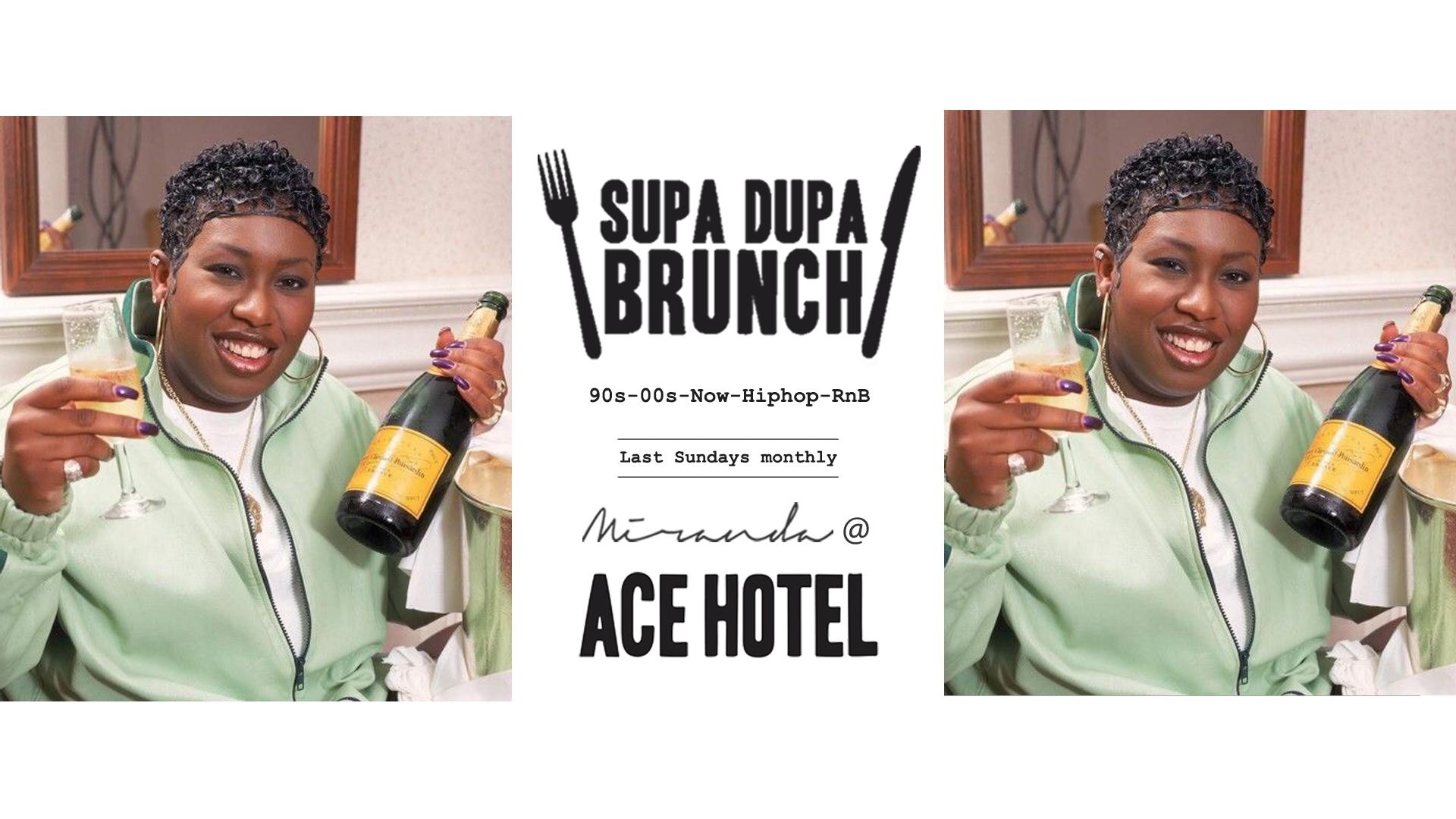 Get in touch if it’s your birthday for discounts and cake on us! brunch@supadupaflylove.com

Check out the photos www.facebook.com/supadupabrunch

Mixes to catch a vibe www.mixcloud.com/djemilyrawson

Do you love Supa Dupa Fly? Do you consider yourself to be a bit of a foodie? If so, all of your dreams have come true!

Supa Dupa Fly have teamed up with Ace Hotel to throw an afternoon Brunch Party. You can expect an incredible Brunch (with prosecco thrown in!) a 90s-now Hiphop & RnB themed quiz & most importantly, all the tunes you can expect to hear at the Supa Dupa Fly club nights, but in the middle of the day! It’s running from 1-pm-8pm so no late night or dirty hangover on Monday!

Supa Dupa Fly has become THE necessity in many Londoners 90s & 00s Hiphop & RnB lovers diaries, selling out every weekly event and becoming unquestionably the biggest event of it’s kind in the UK. Supa Dupa Fly have hosted shows for artists including Jazzy Jeff, Rita Ora, EZ, Disclosure, & loads more. There have been recent impromptu performances from Amerie & Professor Green, with special guests including Emeli Sande too. Hosting arenas at festivals including Lovebox each year, as well as lots of high profile shows at Shoreditch House have been some of the many highlights. There have been numerous recent press features from the likes of Time Out (calling SDF London’s best RnB Night’), The Guardian, The Metro and The Evening Standard.

Brunch & pudding is included in the ticket price (£33), along with a glass of prosecco. The ticket also includes the party until 8pm, and the quiz! You can pay for more drinks as you go of course (we’re sure you will)! Food will be served up by the incredible in-house chefs at Ace hotel, headed up by Simon Gregory – www.supadupaflylove.com

Prossecco upon arrival. Guests choose from one main & one dessert

DJ Emily Rawson is one of the UK’s most in demand Djs and promoters. Emily has Dj’d for the Kardashians, Chanel, to Nike, Roc Nation, Island Records & artists including Big Boi, Eve & Kanye West. Her festival DJ sets & stage curation include Lovebox, Wireless, The Great Escape & more. Emily does regular done guest mixes for BBC Radio 1Xtra, the BBC World Service & has received numerous press features from The Metro, Time Out, Le Cool & The Evening standard. She works with Shoreditch House & Soho House, under her brands, Supa Dupa Fly & Rock The Belles, where she has presented acts including Daley. In November 2015, Emily won a Marie Claire ‘Women at the top award’ which celebrates the achievements of women in the creative industries, tech & the arts. Emily has a monthly mix residency on BBC Radio 1Xtra as part of Charlie Sloth’s club sloth. www.mixcloud.com/djemilyrawson

She will be joined by her friends from the music world.

Do you LOVE Hiphop & RnB from the 90s through to now? Do you consider yourself to be a nerd when it comes to your knowledge of it? Well here’s your chance to prove it! There will be a prize for the winning team…

Quizmaster Big ‘Teddy’ Ted will be your host – he IS Hip Hop! Supa Dupa Fly’s champion crowd pleaser and deck ripper like no other! His now legendary 10-year stint on Kiss 100 was home to a show that featured hip hop greats from Run DMC to Missy Elliot to Jay Z.

Tickets £33 including a 2 Course Brunch, Prosecco, party & Quiz (1-1.45pm arrival for brunch tables please) www.supadupaflylove.com OR £8 entry tickets for party & quiz only from (from 3pm arrival)

Birthdays Get in touch brunch@supadupaflylove.com if you’re a birthday group of 10+ so we can arrange some cake cake cake cake… on us of course!