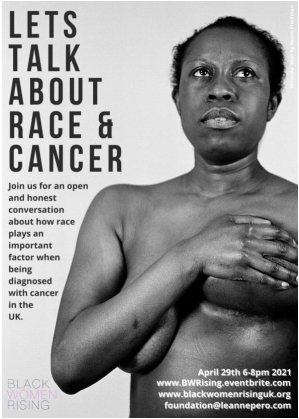 Join Black Women Rising for ‘Let’s Talk About Race & Cancer’, a one-off virtual event where they explore the lived experiences of Black women and non-binary people in the UK and engage in an open and honest conversation about how race plays an important factor when being diagnosed with cancer in the UK.

● According to a report conducted by Public Health England in 2016, Black African and Black Caribbean women are twice as likely to be diagnosed with late-stage breast cancer compared to their white counterparts.

● A survey conducted by Cancer Research UK in 2016 found that Black women are less likely than White women to go for a mammogram when invited by the NHS.

● Whilst concurrently, a 2021 survey conducted by Black Women Rising UK, found that 46% of the women were told by their consultant in their initial consultation that despite having symptoms, they did not believe that they had cancer.

Though there is no simple answer to what lies behind the disparity, 96% of those who took part in the Black Women Rising 100 Women Survey said they do not see themselves represented enough in the media talking about breast cancer.

On Thursday 29th April 6-8pm, Black Women Rising will be holding a virtual event, hosted by comedian, blogger, and public speaker Jessica Jones (@thefatfunnyone), that will feature an array of Black women panellists including those from the medical world, cancer survivors, and those diagnosed – to discuss race and cancer.

The Black Women Rising cancer support project was set up in 2017 by award-winning community champion Leanne Pero after she struggled with the aftermath of her battle with breast cancer at just 30 years old. In her quest to find the right services to aid her, Leanne soon realised that the NHS lacked cancer support packages for Black cancer patients.It was then that Leanne decided to create her own platform to showcase these stories and provide vital support for Black cancer patients and survivors as they undergo daunting cancer treatments and experience difficulty in the tricky remission stage. And so, Black Women Rising was born.

About the event Leanne says; “Honestly speaking, it breaks my heart that we are having to hold this event in 2021, especially after all of the learning of the inequalities Black people face all over the world when it comes to very basic things like healthcare. As a woman of colour who speaks up about my own experiences as well as on the behalf of others, I know how important it is for our voices to find their way to wider-reaching platforms belonging to charities and brands. Sadly, more often than not we are subjected to a barrage of relentless abuse & accusations of race-baiting when speaking our truths on these platforms.

In addition, they are often not moderated in such a way that shows that they understand the personal risk to our safety & emotional well-being. We know the power that our voices hold in helping to raise awareness within the Black community. I hope that by facilitating this open and honest conversation, we can inspire and support the much-needed change.” ‘Let’s Talk About Race & Cancer’ will be open to health care professionals, charities, brands, and the public to connect, share experiences, witness, and re-source as a collective. Whilst most of the discussion will be with Black women around the topic of breast cancer, the panellists will engage in conversations that explore the wider field of cancer in the UK, and is open to all. Resources will also be available to people to have after the event. Tickets are available to purchase on Eventbrite.

Leanne Pero. Breast Cancer Survivor and Founder of The Leanne Pero Foundation, and Black Women Rising. Towards the end of 2016, just 6 months after nursing her mother through her second breast cancer diagnosis, Leanne was diagnosed with stage 3 breast cancer. She bravely underwent a bilateral mastectomy with an immediate reconstruction, as well as 8 gruelling rounds of chemotherapy. Using her platform, Leanne shared her story to raise awareness amongst young people and the BAME community. What stood out to her throughout her time with cancer was the lack of physical and emotional support being offered by the NHS for black cancer patients. In 2017, Leanne began arranging informal peer groups for BAME female cancer patients and survivors, and so Black Women Rising was born.

Jessica Jones. Motivational Comedian, Award-Winning Blogger, Mother of 3. Known online as ‘The Fat Funny One’, Jessica is on a mission to empower women, make them laugh, and share the realities of being a woman, and a mother, and living in a modern world. Jessica will be the host of the panel. “In honour of my wonderful friend Emma, I am keen to always support the cancer community in any way I am able. We lost Emma at 29. 29! She asked me to continue her legacy and to try and support and help as many women as possible and that is exactly what I will continue to do.”

Miranda Ashitey, 38. Former Administrator. In 2014, Miranda was diagnosed with breast cancer. Having been training for the Great North Run, Miranda completed the race in just over two hours on the Sunday and started chemo on the following Thursday. Miranda has endured numerous cycles of chemotherapy and radiotherapy, lumpectomy’s, and subcutaneous injections from 2014 until December 2020 when it was decided these were not working. Miranda is now receiving Kadcyla to keep things stable. “We have this tag of the angry black women. Always have to be careful about how we represent ourselves. Even our language. We have to self-modulate. We are the most burdened and the most unprotected. Hyper-visible, overexposed, and under-protected. We are expected to do everything and not be protected for it. It’s hard. “

Helena, 43. Dance Teacher, Sports Coach, and Fitness Instructor. In 2014 Helena was diagnosed with Breast Cancer and undertook a six-month treatment plan of chemotherapy. She also had a mastectomy and a further twelve months of Herceptin treatment. In 2017, Helena found another lump in the same place and had to experience cancer treatments all over again. For Helena, this experience made her feel alone. From not having anyone in person and not seeing anyone in the leaflets she was given that she could relate to, Helena also had to wait 11 weeks to get a wig because the NHS service couldn’t provide her with one that matched her hair. Helena recognises the mental effects that cancer can have on a person, from deep depression to PTSD. Black Women Rising has been a breath of fresh air for Helena and has become a family of wonderful people that she can relate to.

Georgette Oni. Plastic and Reconstructive Surgeon. Georgette is one of a handful of plastic and reconstructive surgeons in the UK who is dual qualified also in breast surgical oncology. She is a mentor to aspiring female surgeons, particularly from a BAME background, and is a trustee-elect for Breast Cancer Now. “The way things are framed is very important. Making people aware is a two-way thing; patients and professionals. We all have to engage. At the end of the day, we (as black people) are a minority in this country. The NHS is to look at the majority but we know one size does not fit all. For other groups, for example, South Asians or Polish, they have leaflets that are translated. Interpreters. Why should modifications in health care not apply to us?”

Clover Lewis-Darke. Entrepreneur. Clover is the founder of award-winning mastectomy fashion brand CloverLewis. Clover is also a Patient Advocate for Breast Cancer now, and Patron for the Life After Breast Cancer Fund. “I was soon called back into the breast clinic when the test results showed irregular cells. I was told by the breast care nurse that initially; my results were not of concern because ‘you look so young so we assumed it wasn’t breast cancer.’ My age was on all of my hospital files. Part of the problem is that age discrimination often occurs with Black women. I, like many Black women, look young for my biological age. That assumption in a clinical setting could have cost me my life.

Sarah Adomah, 43. Clinical Nurse Specialist – Breast Cancer. Sarah has over 16 years of experience working in cancer care. Sarah often collaborates with other health professionals and agencies to raise awareness and educate people about cancer among black and ethnic minority groups. “I have come across colleagues within the NHS who were great, experienced nurses. However, because of the way they are treated, many do not feel that they cannot excel in their career. They think that either the level or area where they are is where they belong. There are inequalities in the workplace. Unbiased racism. They would rather stay back and allow others to bypass them because they’ve been made to feel that way for a long time.”

Angel Bascom, 24. Freelance Creative. In 2018, Angel was diagnosed with cancer which led her to use her voice to educate others. Due to her own isolated experience during treatment, this pushed Angel to make a change, which she now does as a member of the Youth Advisory group at Teenage Cancer Trust. “When black women speak out and stand their ground, it’s amazing! When black women make a way for positive change and use their voice for good and educating people, and shedding light on women who need to be heard, it’s so special. “

Chrissie, 46. Body Confidence Coach. “My experience going through cancer as a black woman has been difficult. I’ve felt like I’ve had to fight hard for some of the basics. I feel there is a huge disparity when it comes to health access and ethnicity.